Mobile/Desktop convergence is something that Purism had planned and has been developing since the launch of the Librem 5.

It all started with the amazing work that Adrien initiated with the libhandy library, that let the default Librem 5 applications be adapted from the exact same applications running on the laptops.

Now the Librem 5 team is moving a step further by letting the Librem 5 being used as a real desktop computer by simply plugging it into an external monitor, keyboard and mouse through a single USB hub. The feature is still under active development at the time of writing this article, but the different components are starting to come together and it is already pretty functional. 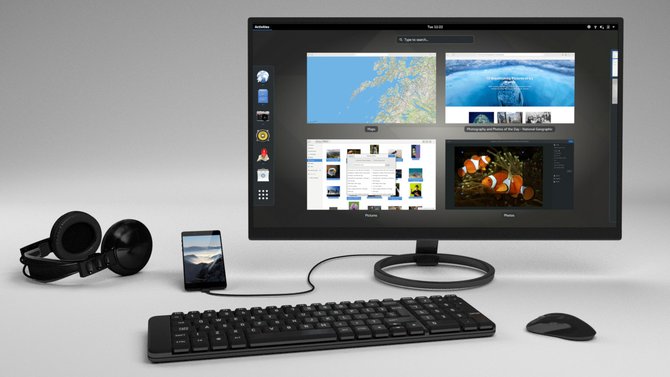 3D Graphics mockup that was made to promote convergence during the Librem 5 crowd funding campaign.

I was in charge of making a video to promote that feature and, even if it is a commercial teaser, I wanted to avoid using special effects and I wished to show the real device and the real features in action. In general, shooting the real thing is what generates the most realistic output anyway.

So my plan was to do this video with a real artist working on her own art with the Librem 5 and professional creative software. Therefore, I prepared everything and scheduled a shooting with the artist. Almost everything went fine, but a few days before the shooting, my country’s government imposed a country-wide lock-down to the population, which prevented me to do the shooting as planned.

Instead of canceling or postponing the shooting to an undefined date, I decided to do it anyway with what I had at home. So I asked my wife to be the actress (she is a nurse in the real world), I took some of the gear from my digital studio, I setup an old animation project of mine and did the shooting at home. We had to modify the script a bit, with my wife pretending to draw but we used the real Librem 5 device to shoot everything that is shown on any screen in this video.

Here is the final result, which I am pretty proud of! And you know, I am being very objective when I say that 😉

I was myself blown away by the simplicity of use and the potential of such a great feature. It is just a matter of plugging and playing! Moving a mobile application away from a mobile screen to expand it as a desktop application on a 24″ monitor, and vice versa, is something I had never seen before and it is pretty amazing. Even my wife, who is not much into computers was amazed.

This is a short scene that didn’t make it in the final video (because of timing and continuity reasons) and that shows exactly what I am talking about.

Thanks for your interest and your support. This is only the beginning of a beautiful project that is the Librem 5. Stay tuned for more updates!