“See Your Junk” – Behind the scenes

At Purism, we aim to promote privacy and freedom through the use of free software (and we see it as ethical software). When we work, and in order to produce our content–such as what you see in this page–we use free software, too. And so, with a small budget and some basic audio and video gear, along with a few Librem laptops (running free software only, of course), we have made this video the ethical way, using ethical tools from beginning to end.

Pre-production took us the longest, and kept us working for quite some time–we ended up taking over a month to prepare everything. Todd, Purism’s founder and CEO, handed me a really funny script that he had written himself; I read it and started organizing the shoot with the help of Jenny Lavery, who did an amazing job of finding the perfect actors, location and props. 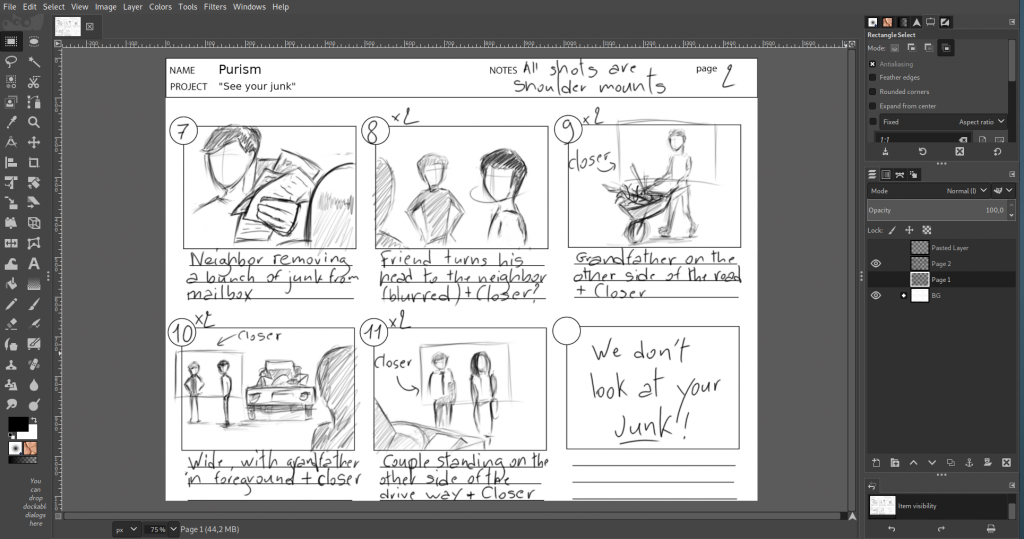 After planning every shot I started drawing a storyboard, using GIMP, my Librem 13, and a simple graphics tablet.

Once everything was planned for, I packed my suitcase and traveled to Austin, Texas, with Therry Cazorla, a fellow French countryman. Therry is the director of photography with whom I have been working for years. 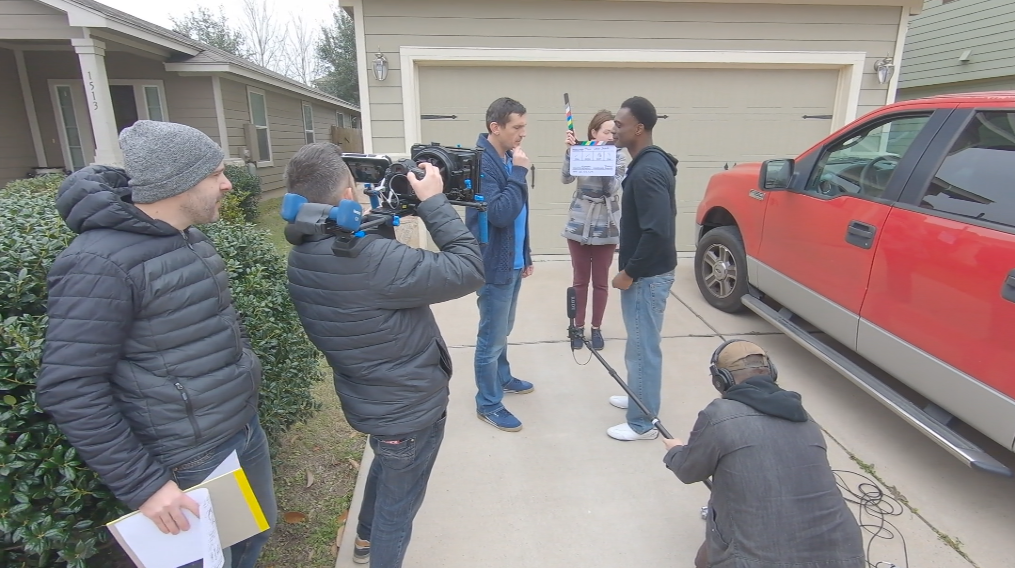 We were so lucky with the weather; the weather is always a big question mark, and a nightmare in what comes to delaying everything, when shooting outside. I had planned on spending two full days shooting the entire video, but everything went so well–and everybody was so professional–that we ended up managing to shoot it in just one day, which was amazing!

Like I said before, we chose to use free software only. That choice led us to shoot with a camera that is compatible with Magic Lantern, a free software add-on that… well, adds features to the camera we used, and that also allowed us to shoot in RAW format–i.e., straight from the sensor and generating an uncompressed file, resulting in the maximum possible raw image quality. 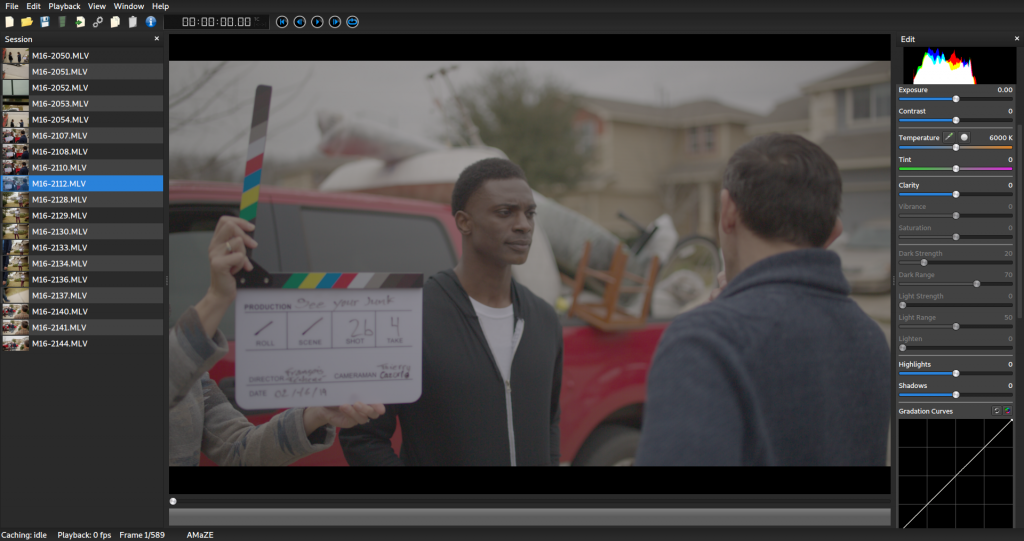 The RAW format is also very useful for it allowed me to process the look of our initial footage as soon as I finished recording; I used a software called MLV-App to do just that, because it lets me analyze my raw footage and apply a flat look to it. This is a personal preference, it’s what I prefer to do regarding color grading technique and results. Everything flowed so well I managed to put together a first, rough edit, the very day we finished shooting.

Shooting in the USA was fun, but once we finished I had to travel back to France, to my home studio, where I had all the material I needed to start editing.

I used Kdenlive to edit the video; it is a very complete, very professional, free software, non-linear video editor. 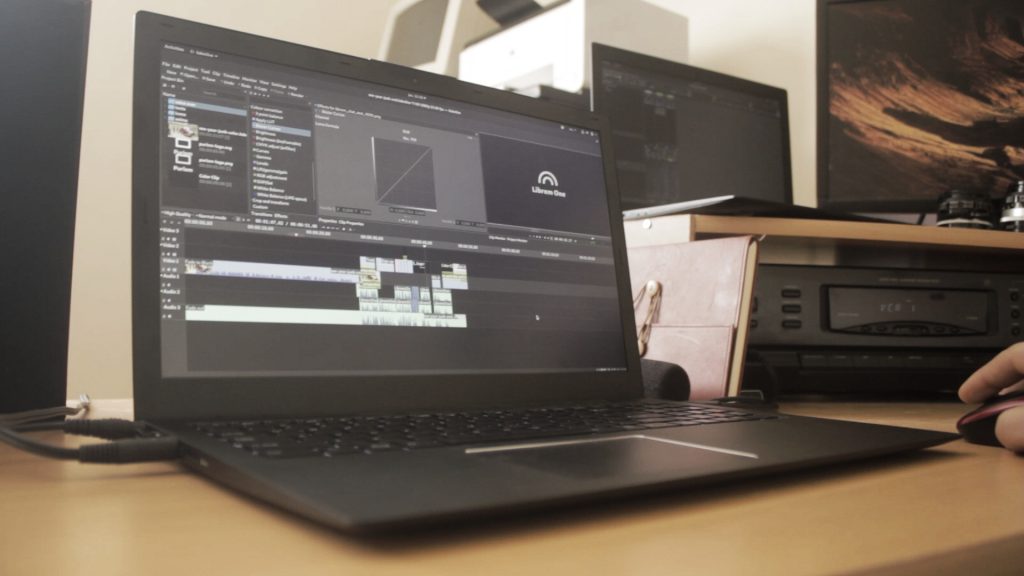 I now had the perfect opportunity to test the new Librem 15 with a 4k screen… having this video to finish meant I was simultaneously able to test hardware and software in a real project, and help developers improve product experience. And so I made a first cut of the video, and started to edit the audio.

Audio quality plays a big part in the overall quality of the final, resulting video. I would even go a step further and say the quality of the audio is perhaps more important than that of the image, when making a professional-grade video (but feel free to disagree). 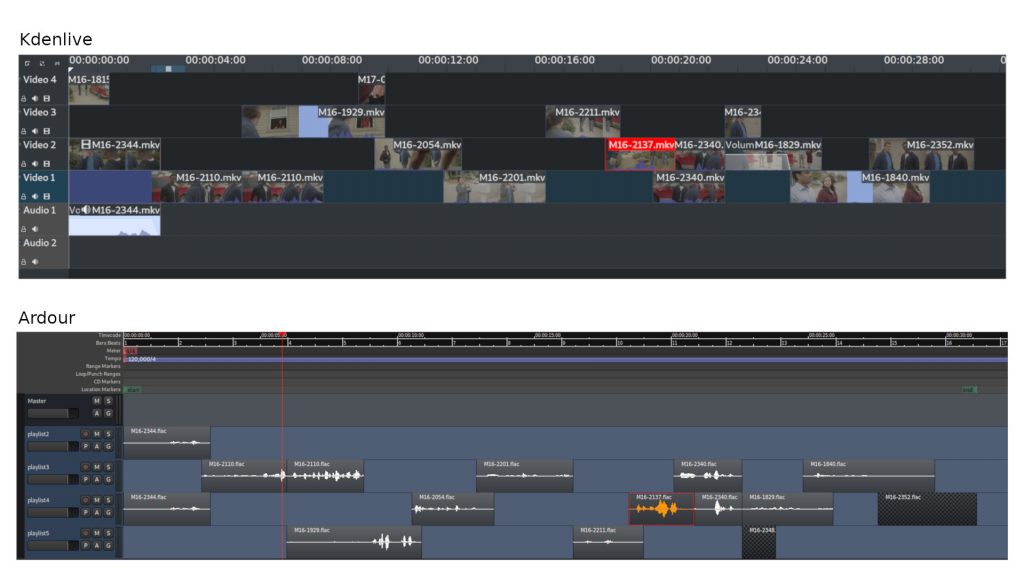 In order to professionally edit the audio, I had to export my timeline from the video editor to a proper audio editor—Ardour, in this case. This import/export feature exists neither in Kdenlive nor in Ardour, but I needed it and had to find a solution—and this is one of the great advantages of using free software: that it is public and belongs to its users, making creating a missing feature (and giving it back to the community) something very doable. And that’s exactly what I did: I created a python script that converts the timeline from my video editor into a timeline for my audio editor. If you want it, you can get it in our Gitlab repository.

This allowed me to perfectly edit my audio, using very professional free software tools; it guaranteed a smooth, even sound, where the cuts between different shots are impossible to hear. Afterwards I added some extra ambient noise to ensure continuity and to give a bit more color–which leads us to the subject of our next chapter. 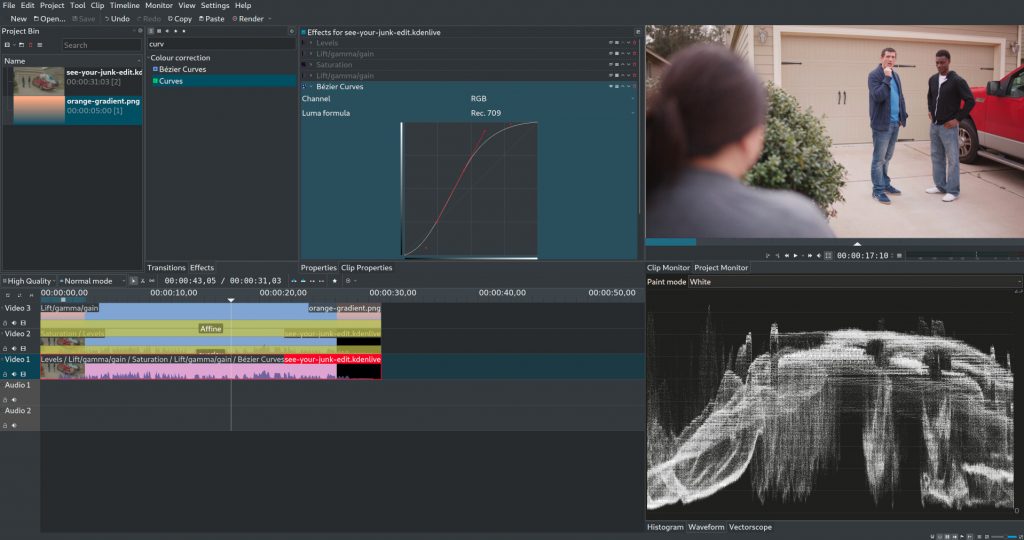 The color of each individual take was then worked in order to guarantee its consistency over the whole video. I later applied a global (meaning, to the whole video sequence) color grading, to give it a consistent style and tone. I like to work over very flat footage that is low in saturation and contrast. I then add some contrast with a bleach bypass effect, and do the final tweaks on the curves and levels filters. The graph monitors in Kdelive let me adjust colors and levels with a high degree of precision—and I can be sure that colors are just right, that my eyes are not tricking me.

I added some text effects at the end of the video: mostly, over the Librem One logo. 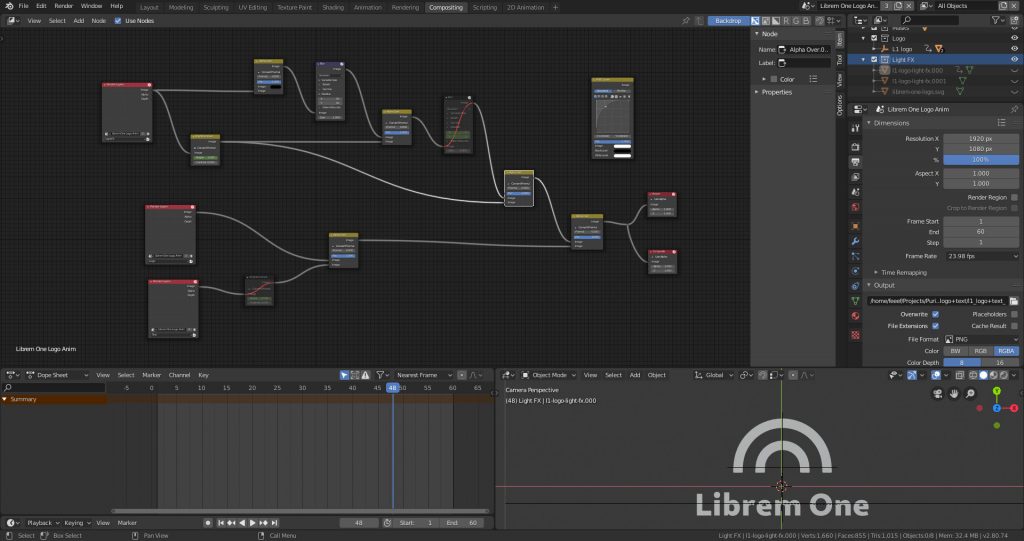 I made all my text animations in Blender, an amazing 3D free software application with very powerful compositing and animation features. 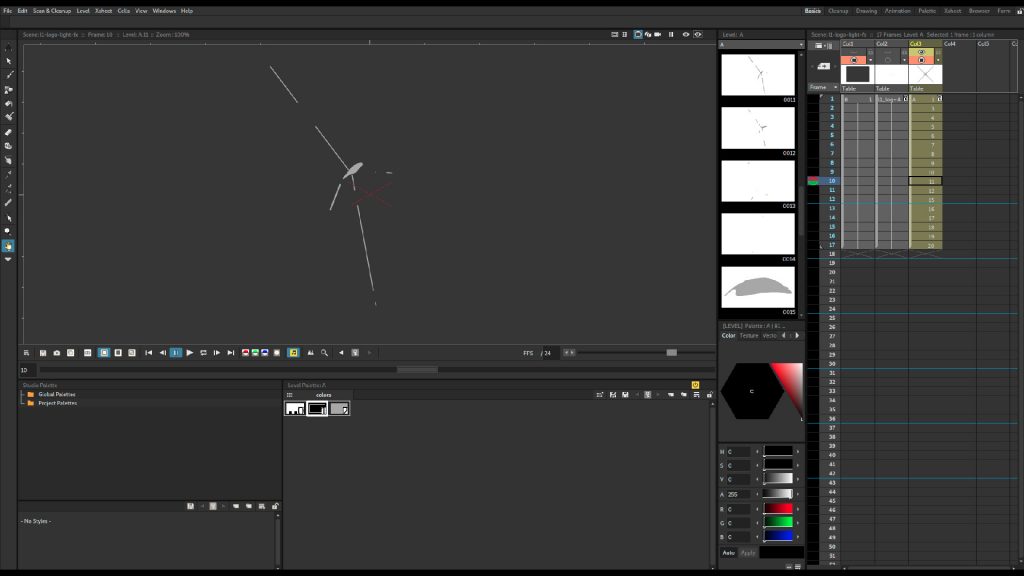 You might have noticed a subtle light effect in the logo animation (just before the rainbow appears)–it’s actually a handmade, traditional animation made with OpenToonz, a free software app that was also used for some of the biggest productions of the Japanese anime industry.

That’s it, and thank you for your time–it was fun 🙂

Andre Martin as The Husband

Will Moleon as The Enlightened One

Karina Dominguez as The Wife

Christine Hoang as The Neighbor

Tom Costello Jr. as The Gardener

Sanjay Rao as The Business Man

Bryan Lunduke as The Voice-Over

Todd Weaver producer, screenwriter (and co-directed the actors, too)