Professional animation is not just possible but ideal with free software, this story shares what is possible running PureOS, Librem laptops, and accessories. I have been using free software for 6 years and each year these freedom respecting professional tools I use seem to improve faster than the commercial proprietary pace.

Krita, as an example, released an animation feature that made it the perfect tool for making rough animations. That same year, the software Toonz, that was used by the legendary Studio Ghibli for clean up and coloring purpose, was released as free software under the name of OpenToonz. Nice, with just these two features and tools released, I had everything I needed to do traditional animations again with my Librem based digital studio. Below I will go through the workflow of making a simple hand made 2D animation.

This particular animation was commissioned to me, during the summer, by a young french film production called Baze Production. The goal of this project was to make a cute production identity intro in the same style as Pixar or Illumination Studios, but with hand made animations instead of 3D computer graphics. For that matter, I used 2 Librem laptops and 2 Wacom tablets. 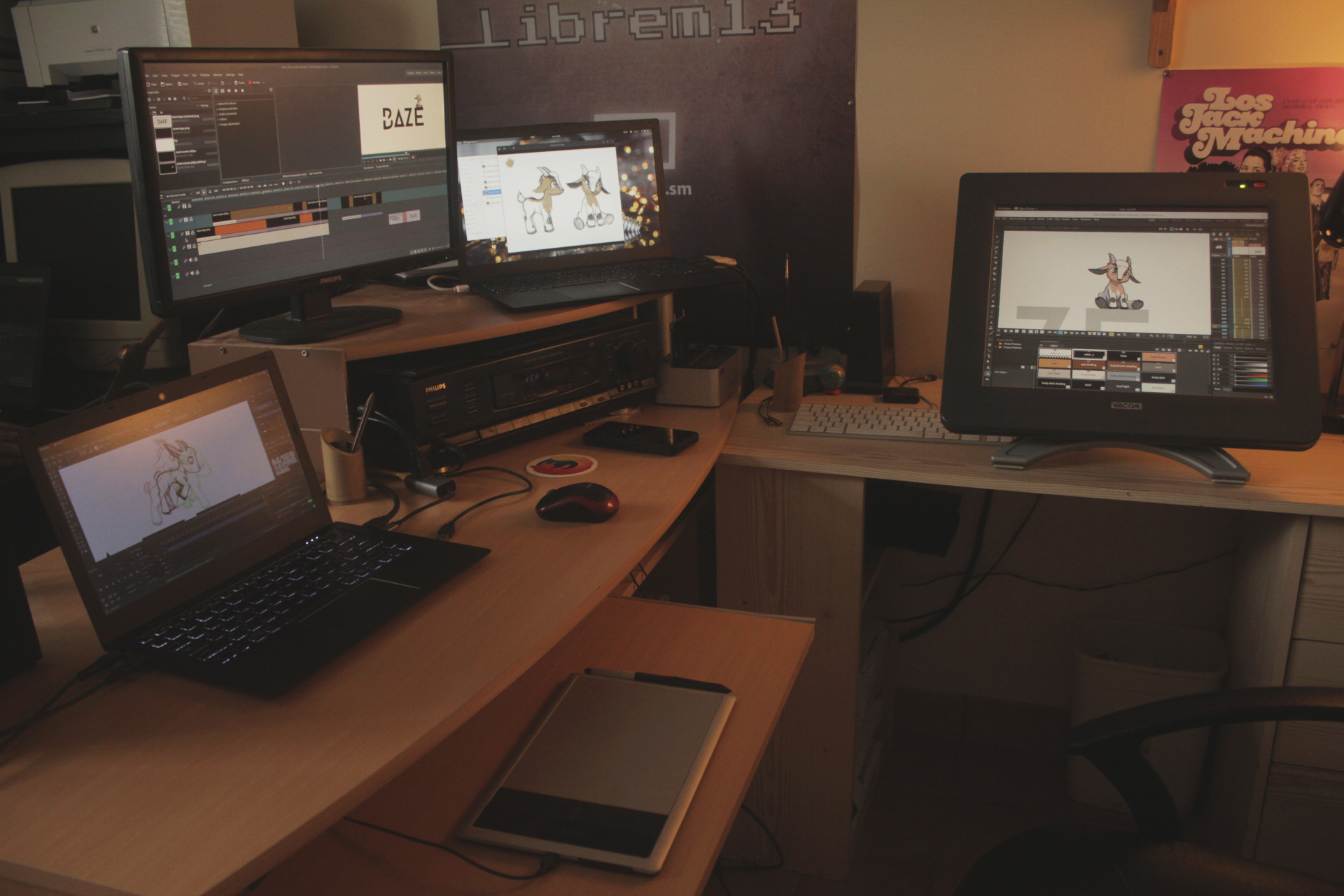 The first step, in this project, was to design the character. The requirements I have been given were pretty straight forward : The character has to be a goat and it has to be cute.

Based on that, I made a few character designs on Krita and the following one was selected. 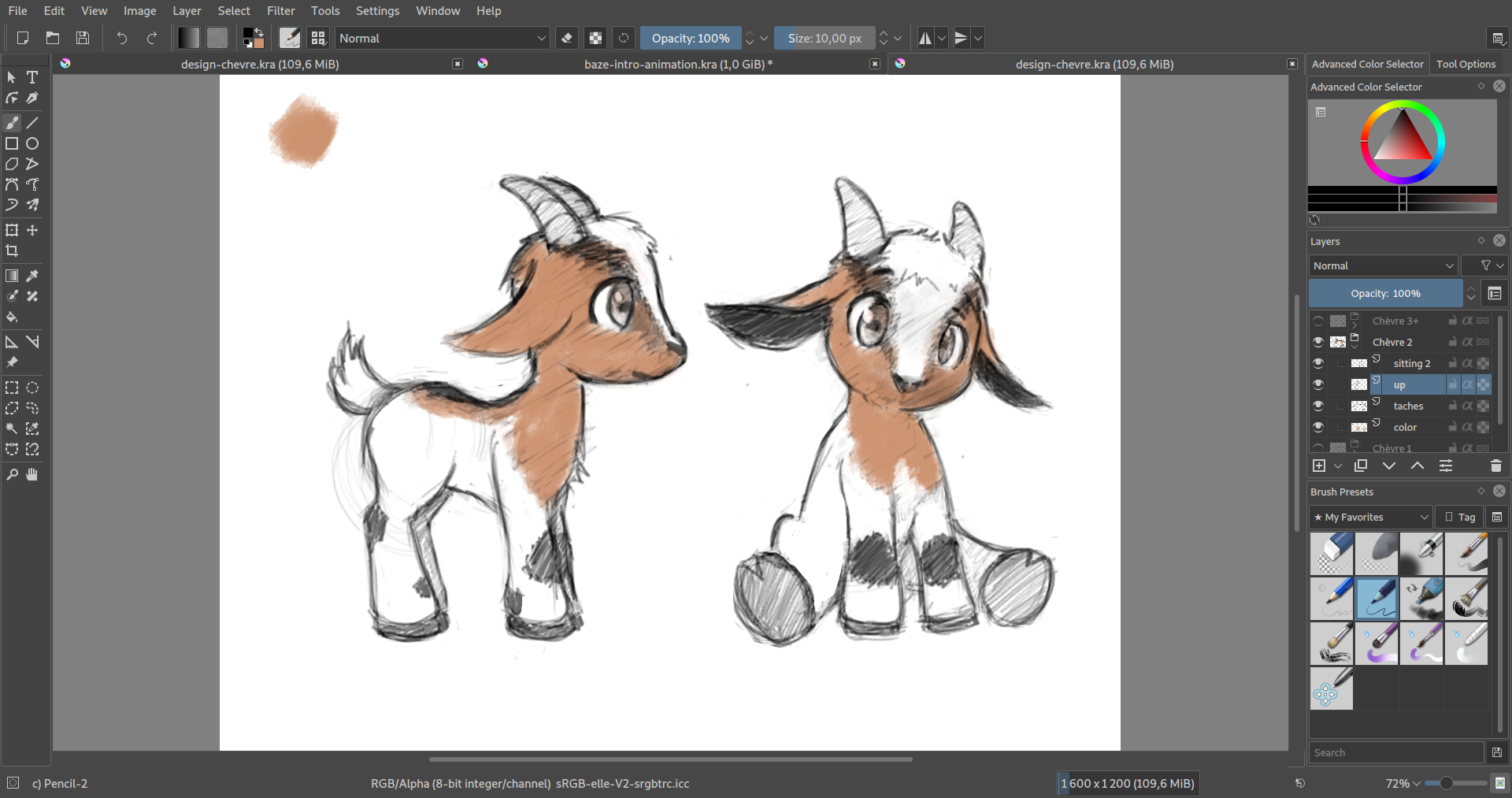 Animating is a lot about observing and understanding how to decompose a movement. Therefore, before diving into the animation, I watched many “cute goats” videos online. I was impressed by how popular those videos are on the internet!

After a few hours of watching cute baby goats videos, I had a rough idea about how they move but I didn’t really know what our goat would do on those “BAZE” letters. The first requirement was that the goat enters the screen from the left, jumps on the letter “B” and sits on it. Then, I put myself in the head of a goat and thought that the “E” was flatter and wider than the “B” so it would be more comfortable to sit there. I could have made the goat appear from the right side of the screen but I though it would be fun to see it jump across the different letters. Especially as the “A” is a tricky one to stand on top of.

As this small animation is a single shot, instead of making a proper storyboard, I ended up drawing a few key frames that would give a first impression of what the animation would be. 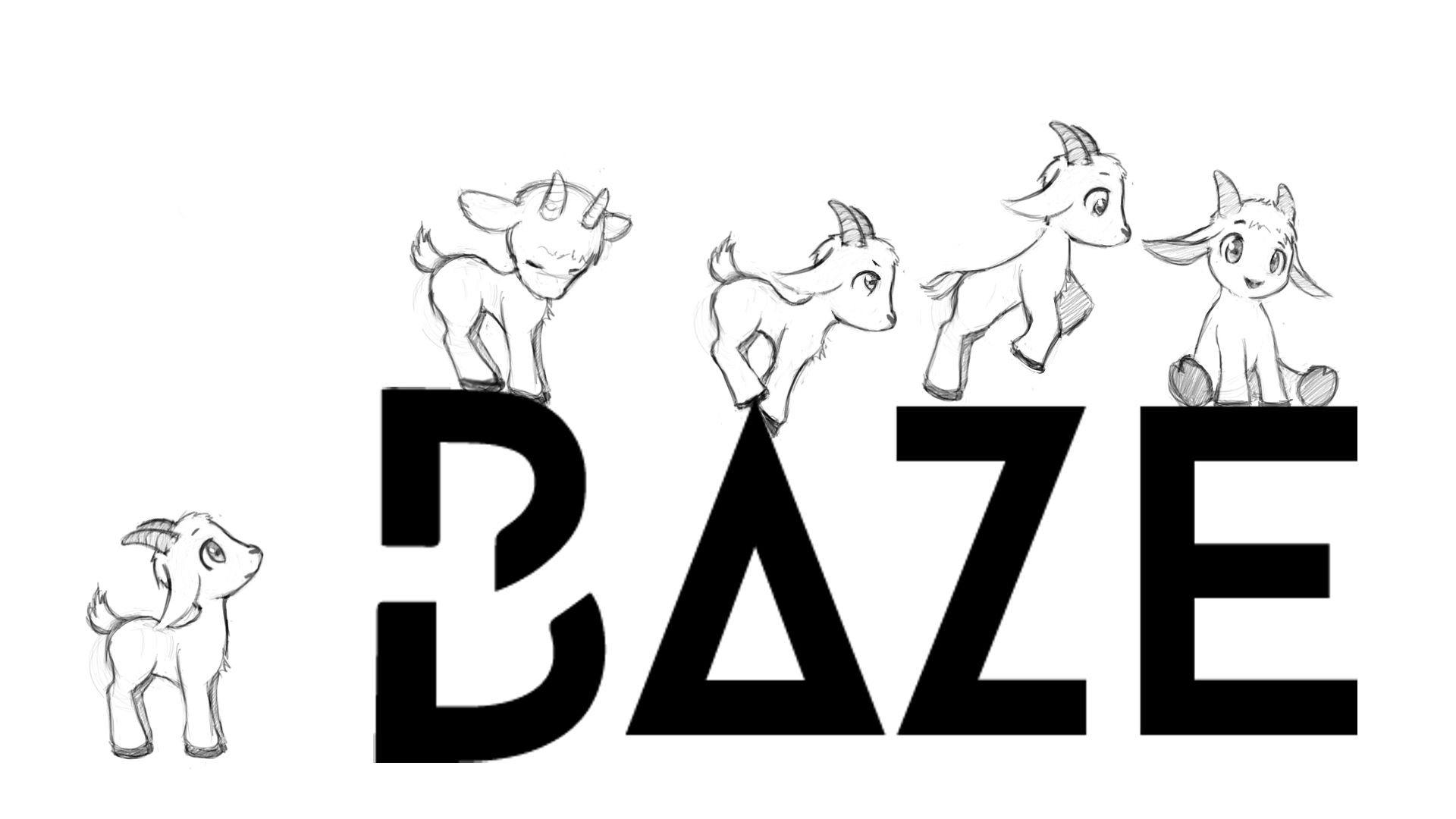 Based on those few key frames, I made a 12 fps rough animation on Krita. This is a pretty long process but it is the one I prefer doing as it feels like giving life to this cute animal. I always think that there is something magical with animations. 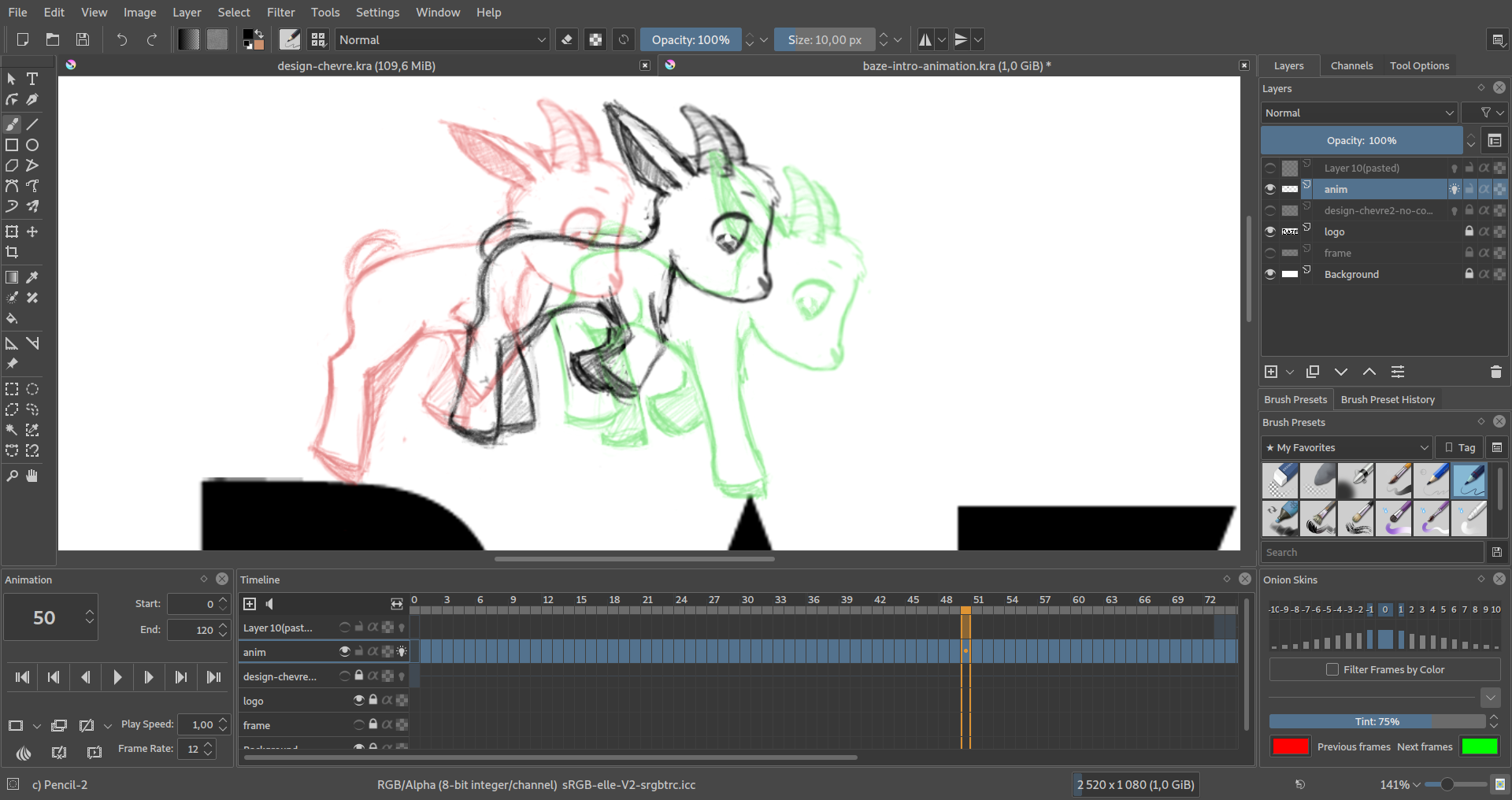 When I do sketches or rough animations, I don’t need to be extremely precise with my lines and I prefer using a classic graphics tablet that is standing on my table and where I do not have my hand over the screen. This way, it lets me keep my eye on the entire canvas while drawing.

For making this rough animation, I used my Librem 13 with a simple Wacom Bamboo tablet. 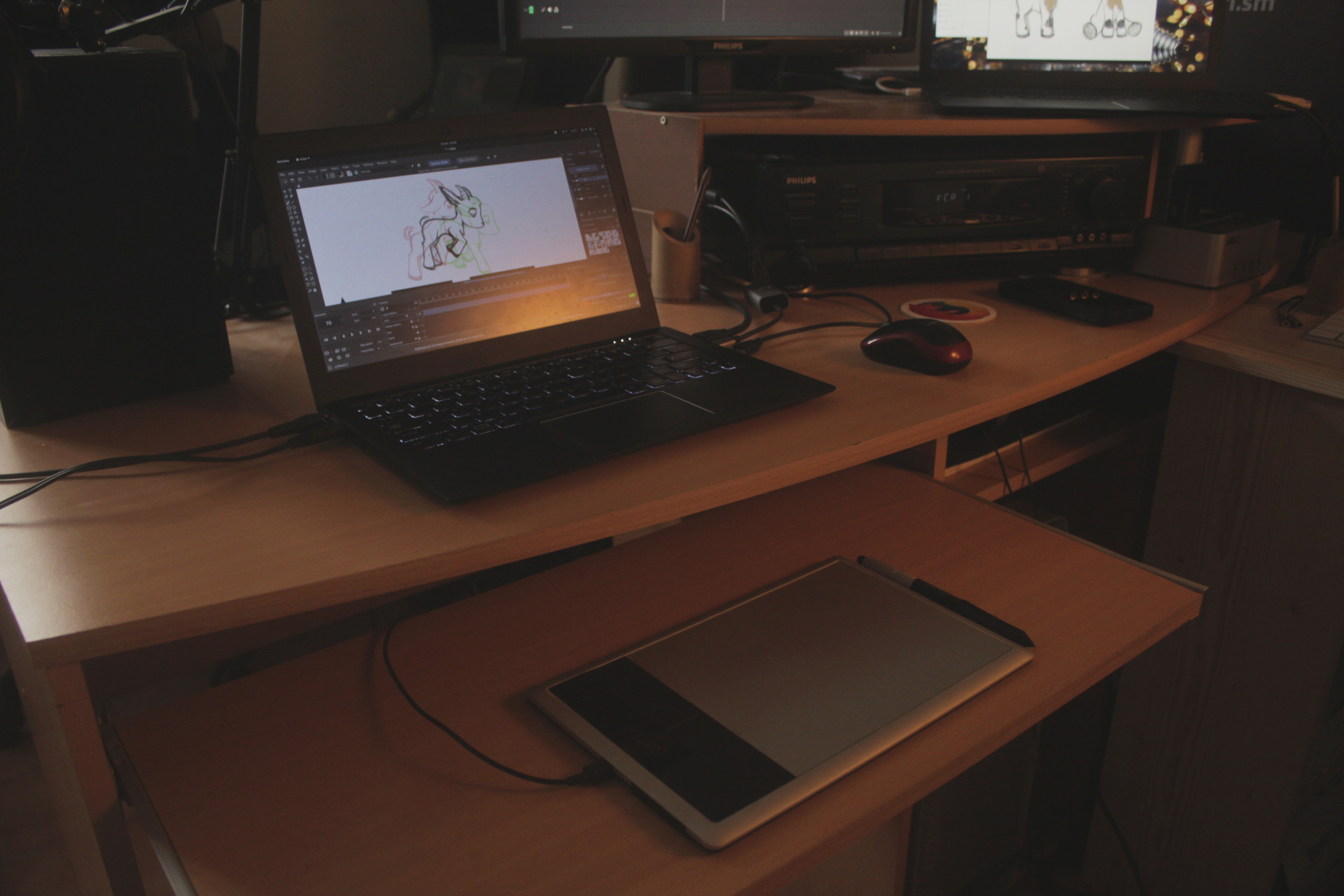 The technique I use for animating is to draw some key frames, dispatch them across the timeline in order to get an idea of the rhythm of the overall movement, then I draw the in-between frames until I get to a smooth result.

I usually animate at 12 frames per second and if I want to do a full speed 24 fps animation, I do a second pass of in-between drawings. For this particular video, I stayed at 12 fps.

Clean up and coloring

I personally love the style of hand made rough animations and I would often end an animation project at this point. However, for this one, I was asked to do a clean and colored animation.

For this kind of work, I need to be a lot more precise with my lines and so, I used a Wacom Cintiq tablet connected to my second Librem laptop. Both laptops data get constantly synchronized through the use of Unison and they share a single mouse, thanks to Barrier. This way, it is easy for me to move from one computer to another. I can even copy and paste from one computer to another. It feels just like if I had 4 screens on a single computer. 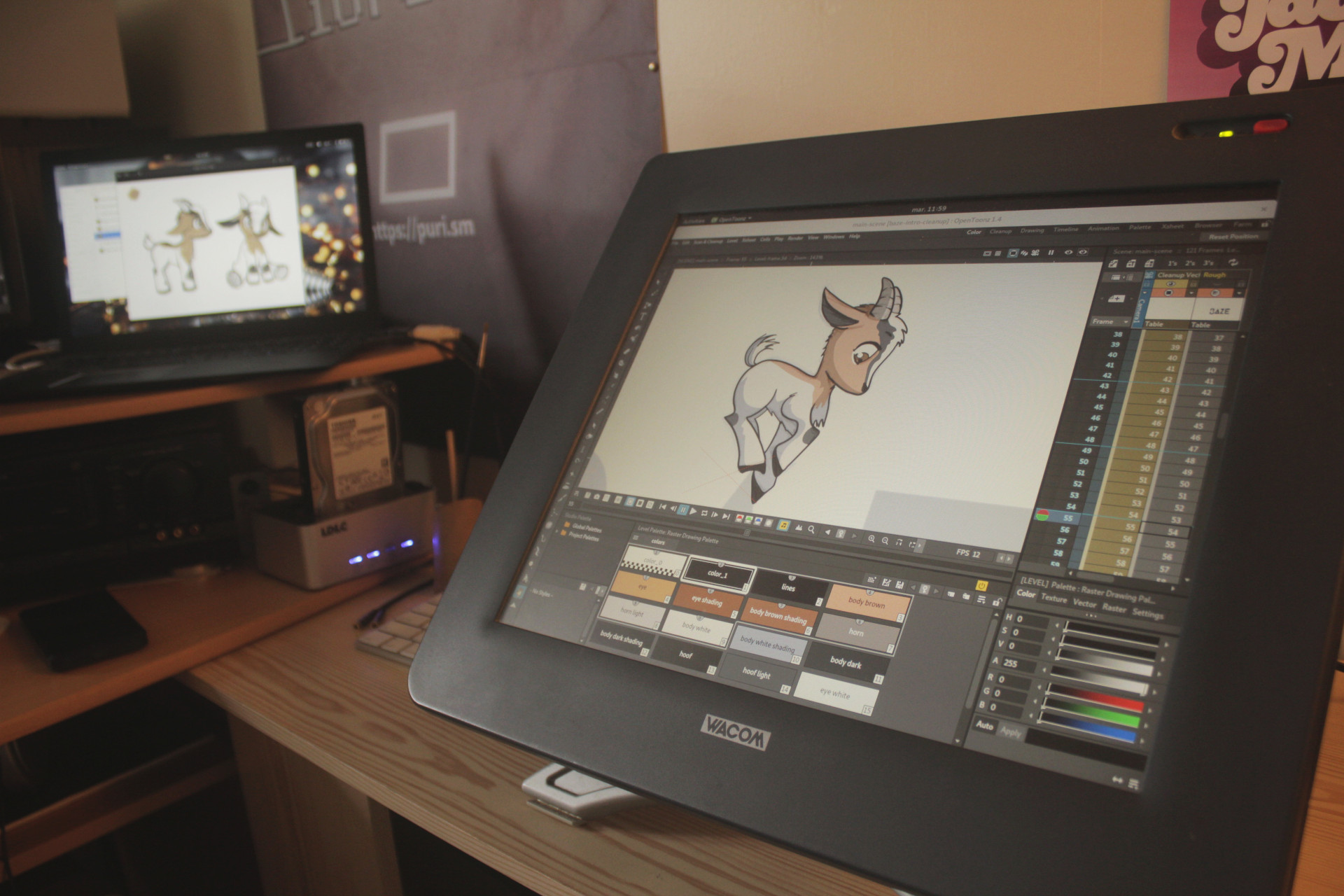 OpenToonz is a beautiful and powerful software. I am pretty new to it and I still have a lot to learn and to practice in order to use it correctly. For this project, I have made the line art and coloring on the same vector layer while the best practice seems to be doing the line art on a vector layer, in order to have smooth editable lines, and the color on a raster layer for it to be well applied and detailed with a brush. I will experiment more with that on a future project.

Here is a video of the final animation.