Introducing Calls on the Librem 5

Arguably the most critical functionality in a phone is the ability to make and receive calls through the Public Switched Telephone Network (PSTN), that is normal cellular calls using phone numbers. While at Purism we are eager to implement communication systems that enable much greater privacy and security than one can expect from PSTN calls, the PSTN is still the most ubiquitous network and for the time being we can’t very well go around selling a phone that isn’t able to make PSTN calls.⁰

My task has been to develop a dialer and call handler for PSTN calls. Like all of our work on the Librem 5, this is intended to make use of existing code wherever possible and also target the GNOME platform which our PureOS defaults to. There is currently no GNOME PSTN dialer so we intend to contribute our program to the GNOME project.

After some research, the initial goal was to use the Telepathy framework, the idea being that we could write a Telepathy PSTN dialer and get a SIP dialer for free because Telepathy has both PSTN and SIP connection managers. What’s more, the PSTN connection manager, telepathy-ring, is used in shipped phones. And, while it has its issues, in my opinion Telepathy is pretty awesome 🙂

Furthermore, my colleague François Téchené wrote a blog post describing a “feature”-based approach rather than an application-based approach to the phone UX. Telepathy could provide the technical underpinnings of such an approach.

It’s worth noting however, that Telepathy is a contentious framework. There are a number of voices within the GNOME project who would seemingly have it die a fiery death. Telepathy is a complex system and is notorious for the difficulty of making changes to the framework itself. To do so, one must synchronise changes to formal D-Bus API specifications and a multitude of distinct software components. A long discussion of Telepathy and possible replacements took place on GNOME’s desktop-devel mailing list in August and September 2017.

After starting to work on some preliminary Telepathy code, given that our goal is for the dialer to be GNOME’s dialer, and the intention to use the contentious Telepathy framework, I checked in with the GNOME desktop-devel mailing list again to see what they thought.

Discussion ensued of both Telepathy and general issues around consolidating different communication systems. The main take away from this discussion was that creating a consolidated system like our “feature”-based approach is difficult to say the least. Like the previous discussion in 2017, a Telepathy-NG was touted. This is future work for us to take on once the basic phone functionality is in place. For now though, there was no major push-back against the idea of creating a PSTN dialer using Telepathy.

I also spoke to Robert McQueen, one of the original guys behind Telepathy, on IRC. The telepathy-ring connection manager makes use of a mobile telephony framework called oFono. Given the complexity of writing a Telepathy client, Robert suggested that a good approach might be to create a UI with a thin abstraction layer, first implementing a simple oFono backend and then afterwards implementing a more complex Telepathy backend. We’ve taken on Robert’s suggestion and our dialer program has been built using this approach. 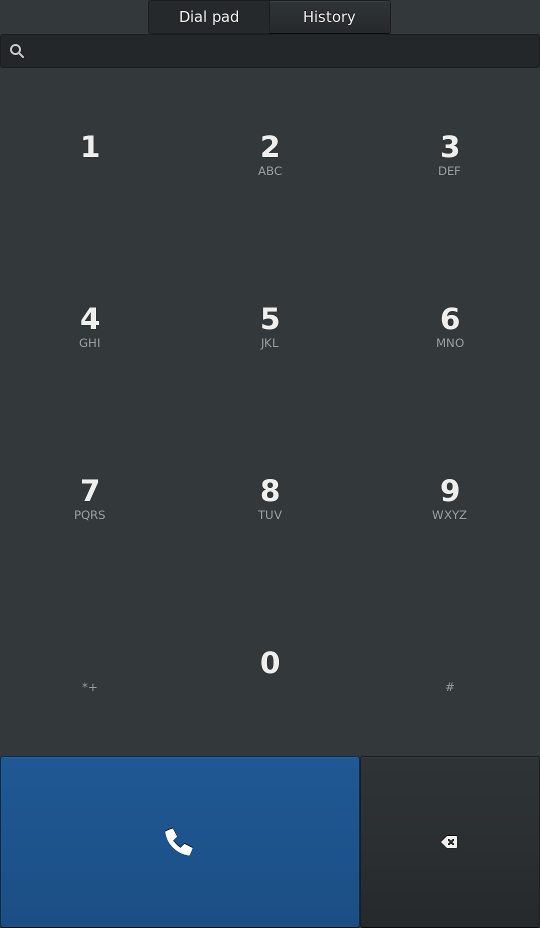 Our program is named Calls. It has a GTK+ 3 user interface and makes use of oFono through a thin abstraction layer. We also make use of our libhandy for the dialpad widget.

The following diagram shows a UMLish representation of the abstraction layer underlying the architecture of Calls: 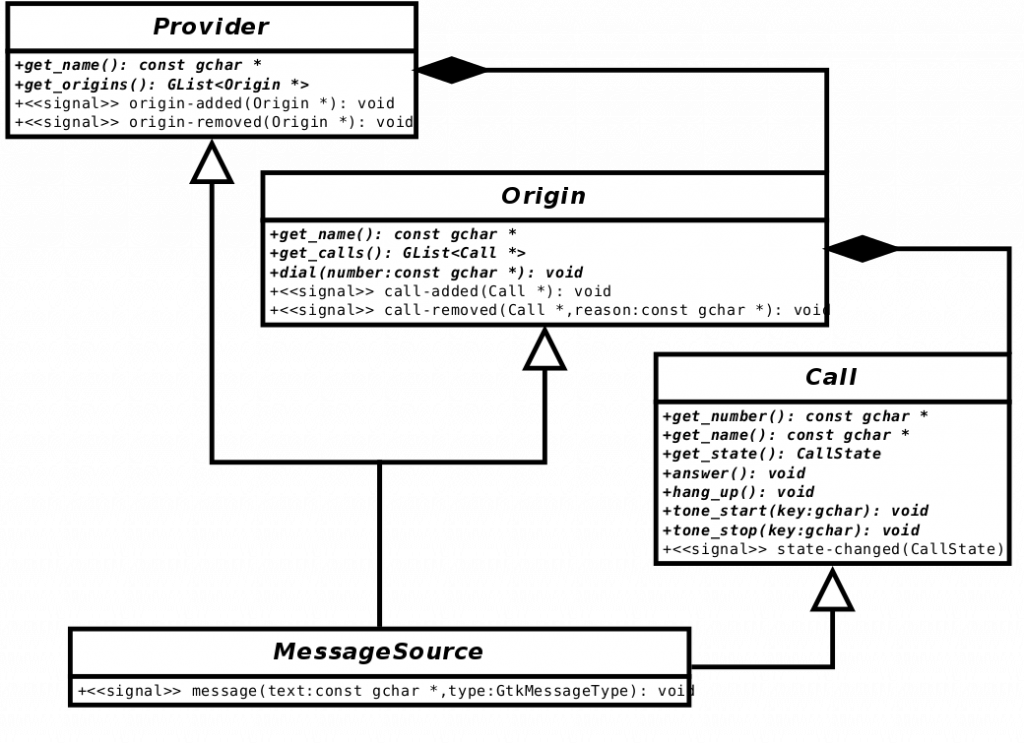 The classes are actually GInterfaces. To give a better understanding of the semantics behind each interface, here is a table of objects that possible implementations could make use of:

The name “Origin” was chosen because it is an object which “originates” a call.

The MessageSource super-interface is used to issue messages to the user. The abstraction layer is intended as a very thin layer to the user interface so implementations are expected to report information, including error messages, warnings and so on, in a manner suitable for presentation to the user. Hence, methods usually do not return error
information but instead rely on the implementation issuing appropriate message signals.

The source code is available in our community group in GNOME’s gitlab.

The demo above is using a SIM7100E modem from SIMCom which you may be able to see mounted on the prototype board, with the red top border, to the bottom right of the display. Like many cellular modems, this modem supports both AT commands and QMI.

When the SIM7100E was first plugged in, oFono didn’t recognise it. However, there is a different mobile telephony framework, ModemManager which did recognise the modem and could make calls, send SMS messages and make data connections out of the box. We considered using ModemManager instead of oFono but unfortunately ModemManager’s voice call support is rudimentary and it has no support for supplementary call services like call waiting or conference calling.

Meanwhile, QMI is preferable to AT commands but oFono has no support for voice calls using QMI. Hence, to get voice calls working, we needed a new driver for the SIM7100E using AT commands. This driver has been upstreamed.

We’ve done a decent amount of work so far but there’s still some way to go before we have a dialer that you can stick in your pocket and use every day. Here are some of the things we have to work on:

That’s all for now, stay tuned for further updates! 🙂

⁰ There was a company who shall remain nameless and they sold a GNU/Linux-based phone that wasn’t able make PSTN calls when it shipped. Some five or so years later, I acquired one of these phones and took it to my local LUG. And of course, what was the first question asked: “can it make a phone call?! haha!” Such was the reputation garnered from shipping a phone that couldn’t make phone calls!