The Librem 5 and recent industry news

Lately, news headlines have been packed with discussions about critical CPU bugs which are not only found in Intel CPUs, but also partially in AMD CPUs and some ARM cores. At the same time, some of our backers have voiced concerns about the future of NXP in light of a potential acquisition by Qualcomm. Therefore you might be wondering, “Will the Librem 5 be affected by these bugs too?” and “will the Purism team get the i.MX 8 chips as planned?”, so let’s address those questions now.

Not affected by Spectre/Meltdown

At the moment we are pretty confident that we will be using one of NXP’s new i.MX 8 family of CPUs/SOCs for the Librem 5 phone. More specifically we are looking at the i.MX 8M which features four ARM Cortex A53 cores. According to ARM, these cores are not affected by the issues now known as Spectre or Meltdown, which ARM’s announcement summarizes in their security update bulletin.

So for the moment we are pretty sure that the Librem 5 phone will not be affected, however we will continue to keep an eye on the situation since more information about these bugs is surfacing regularly. In this respect we can also happily report that we have a new consultant assisting our team in security questions concerning hardware-aided security as well as questions like “is the phone’s CPU affected by Spectre/Meltdown or not”.

For quite some time there have been rumors that Qualcomm might have an interest in acquiring NXP. Since we will be using an NXP chip as the main CPU, specifically one of the i.MX 8 family, we are well aware of this development and are watching it closely.

Qualcomm is an industry leader for high volume consumer electronics whereas NXP targets lower volume industrial customers. This results in pretty different approaches concerning support, especially for free software. Where NXP traditionally is pretty open with specifications, Qualcomm is rather hard to get information from. This is very well reflected by the Linux kernel support for the respective chips. The question is how would it affect continued free software support and availability of information on NXP SOCs if Qualcomm acquires NXP?

First, it is unlikely that this deal will happen at all. Qualcomm had a pretty bad financial year in 2017 so they might not be in the financial position to buy another company. Second, there is a rumor that Broadcom might acquire Qualcomm first. Third, international monopoly control organizations are still investigating if they can allow such a merger at all. Just a few days ago the EU monopoly control agreed to allow the merge but with substantial constraints, for example Qualcomm would have to license several patents free of charge, etc. Finally, there are industry obligations that NXP cannot drop easily: the way NXP works with small and medium sized customers is a cornerstone of many products and customers; changing this would severely hamper all of those businesses involved, and these changes might cause bad reputation, bad marketing and loss of market share.

So all in all, this merger is not really likely to happen soon and there would probably not be changes for existing products like the i.MX 8 family. If the merger happens it might affect future/unreleased products.

In addition to working on obtaining i.MX6QuadPlus development boards to be able to work properly, the phone team is also intensively researching and evaluating software that we will base our development efforts on during the next few months. We are well aware of the huge amount of work ahead of us and the great responsibility that we have committed to. As part of this research, we reached out to the GNOME human interface design team with whom we began discussions on design as well as implementation. For example, we started to implement a proof of concept widget that would make it much easier to adapt existing desktop applications to a phone or even other style of user interface. What we would like to achieve is a convergence of devices so that a single application can adapt to the user interface it is currently being used with. This is still a long way ahead of us, but we are working on it now. We will meet up also with some GNOME team members at FOSDEM to discuss possible development and design goals as well as collaboration possibilities.

The mobile development work for KDE/Plasma will primarily be performed by their own human interface teams. Purism will be supporting their efforts through supplying hardware and documentation about our phone development progress as it is happening. This will help ensure that that KDE/Plasma will function properly on the Librem 5 right from the factory. To understand better where we’re headed with GNOME and KDE together, take a look at this blog post.

We also reviewed and evaluated compositing managers and desktop shells that we could use for a phone UI. We aim to use only Wayland, trying to get rid of as much X11 legacy as we possibly can, for performance issues and for better security. From our discussions with GNOME maintainers of existing compositors and shells, we may be better off igniting a new compositor (upstreamed and backed by GNOME) in order to avoid the X11 baggage.

On the application and middleware side of things, we have generated an impressive list of applications we could start to modify for the phone to reach the campaign goals and we have further narrowed down middleware stacks. We are still evaluating so I do not want to go into too much detail here, in order not set any expectation. We will of course talk about this in more detail in some later blog posts.

As the CPU choice is pretty clear lately, we are going to have a meeting with NXP and some other chip makers at Embedded World in Nürnberg, Germany, at the end of the month. This is very encouraging since we worked for months on getting a direct contact to NXP, which we now finally have and who we will meet in person at the conference. The search for design and manufacturing partners is taking longer than expected though. Our own hardware engineering team together with the software team, especially our low level and kernel engineers, started to create a hardware BOM (bill of material) and also a “floor plan” for a potential PCB (printed circuit board) layout, but it turns out that many manufacturers are reluctant to work with the i.MX 8M since it is a new CPU/SOC. We have, however, some promising leads and good contacts so we will work on that.

By the way, many Purism staff members will be at FOSDEM this week-end, on the 3rd and 4th of February. In addition to the design and marketing team, PureOS and Librem 5 team members will be there and we would love to get in touch with you! Purism representatives dedicated to answering your questions will be wearing this polo shirt so you can easily recognize them: 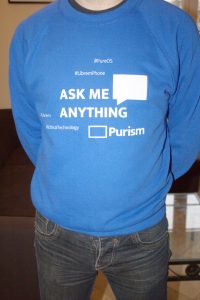