Making a 3D graphics video for the Librem 5

At Purism, we do all our videos and other promotional material internally, with Librem hardware and free software only. This is part of our policy and I think it’s important, when I believe in something, to act in accordance with it.

A few days after releasing the video of the Librem 5 hardware design, I was asked by a few people to publish an article describing the process of making this video.

In early 2019, we shot a funny commercial for Librem One and I made a blog post, along with a video, to explain the process of making this kind of commercial with Librem hardware and free software. I was not going to do a “behind the scenes” blog post again but the Librem 5 video is entirely made with 3D graphics and the workflow is quite different so I think that it is interesting to describe that process in a new post.

The goal of this video is to show the design and features of Librem 5 hardware. So, in other words, to disassemble the phone and to show what’s inside it in terms of hardware.

In order to achieve that in a visually elegant way, I decided to go through a 3D model and do the entire video with computer graphics. 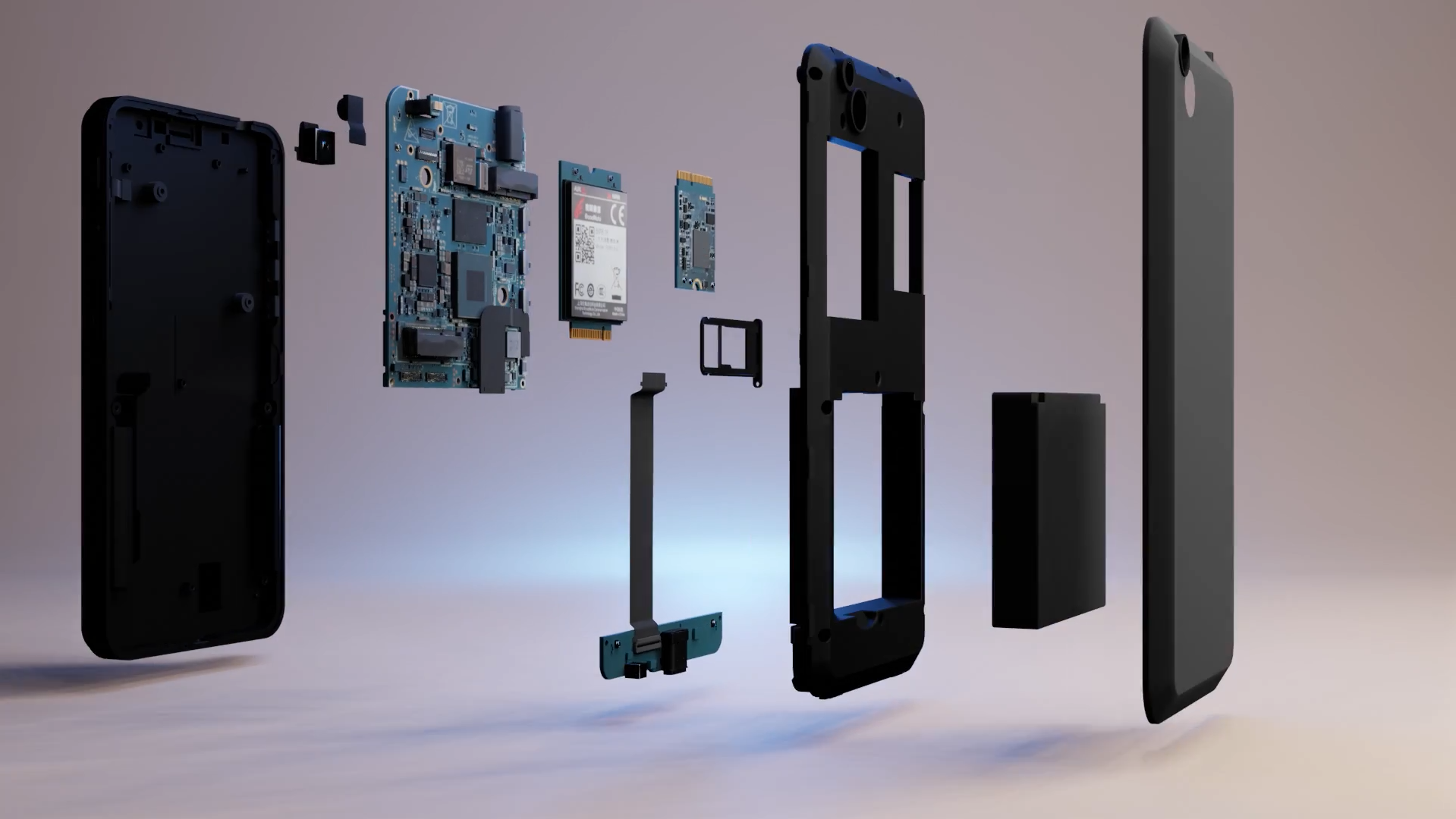 Modeling the phone and all its electronic components was a long task, that, done in parallel with other projects, took me a few months to complete. I started just after the release of the Chestnut batch and completed it a few weeks before the release of the Dogwood batch that had a slightly different design. The key points being the same between Chestnut and Dogwood, I decided to release the video anyway, without going through the long process of modeling again.

I used Blender and as I am not a proper 3D modeler, I had to learn while I was advancing the 3D model. Blender and its community are so great, that it is not difficult to find the right information. I learned a lot during this project. 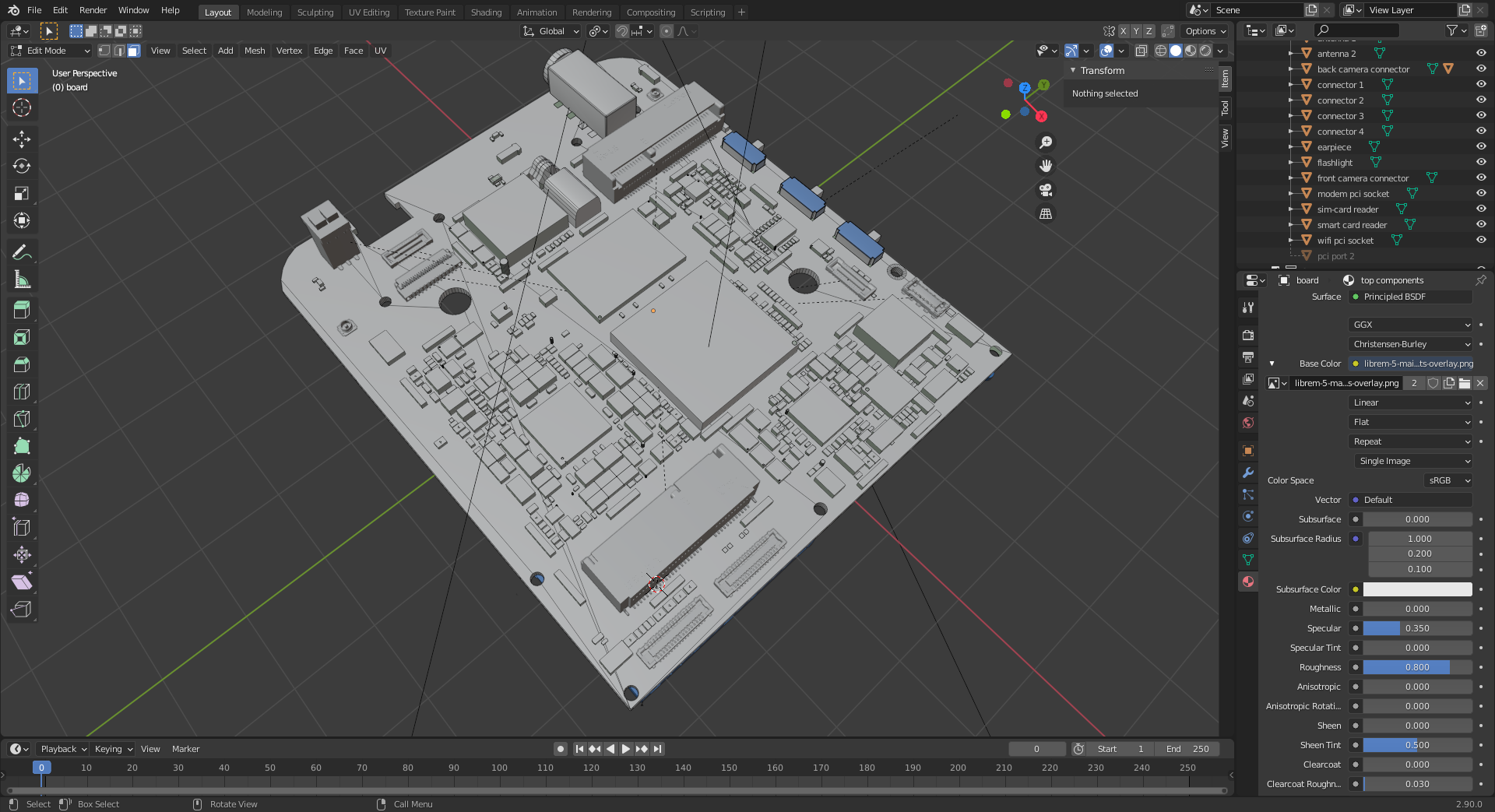 Once modeling was done, came the fun part of animating! I love animating because it feels like giving life to something. There is something magical in animations in general.

To do so, I put the 3D model in its own Blender file, in order to reuse it whenever I need to, and linked it into another file that would hold my animation’s main scene. I am not sure if that is the best approach for this particular animation but it worked for me. From there, I put up a simple scene with a few lights, a touch of color, and I started animating.

Even though, I divided the video into several scenes in the script, I ended up animating the whole sequence in a single timeline, as a unique sequence shot. 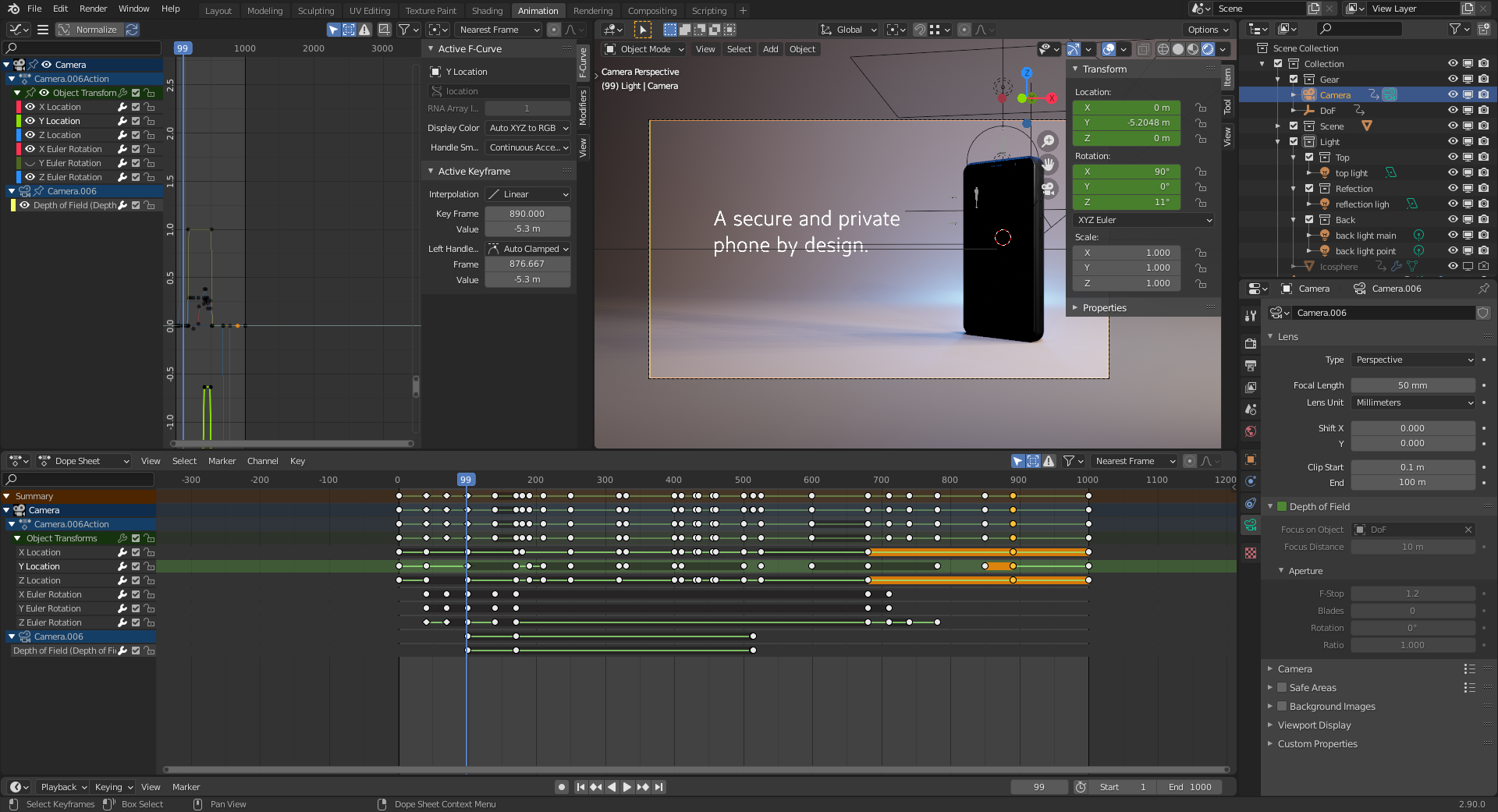 I ended up rendering the animation as a PNG image sequence with the new EEVEE render engine from Blender, which is very fast on my Librem 13 while producing a pretty realistic output.

Although we do visual art internally at Purism, we don’t do music. Therefore, I had to find an existing track for this project. Finding the right music is always pretty difficult. I know that music tastes are subjective and I usually try to find a track that matches the rhythm and the mood of the video. I also look for music that is released under a free license in order not to be in conflict with the free license of the video itself (all the website’s visual material is released under a CC-BY-SA 4.0 license).

Thankfully, there are some amazing artists in the world of free art and I ended up using the beautiful track “Sphere” by Creo, which is modern, full of energy and happiness. 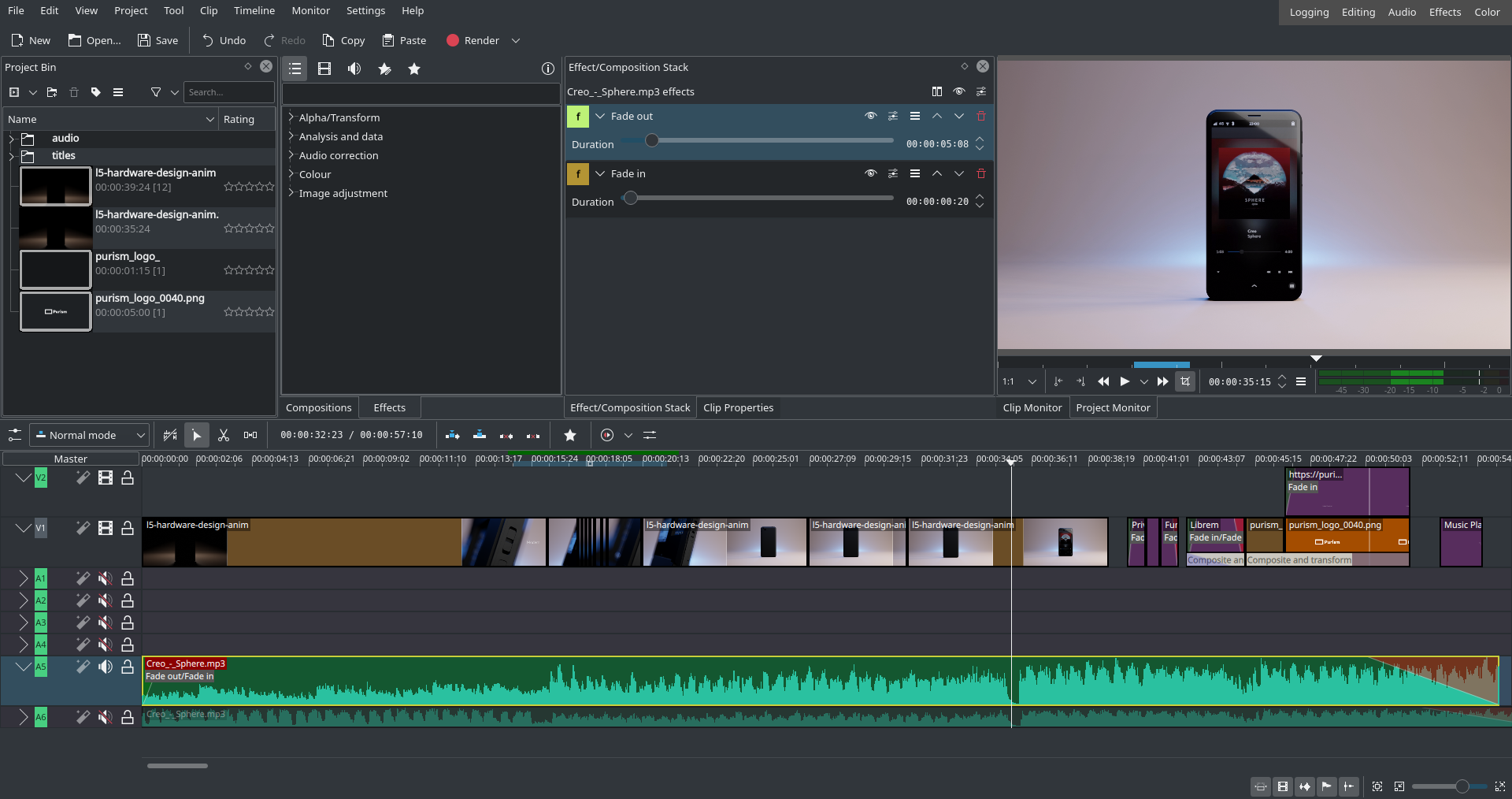 I love working on this kind of video project. It makes me put my head in my dreams, my creativity, like when I was a kid, but this time with the tools to bring this creativity to life.

Lately, I have been working on another project that was very special to me. It is a traditional hand made animation, that is not for Purism but that I made with both my Librem 13 and Librem 15 along with two graphics tablets, free software and lots of love. I will come through the details of making this project in a future blog post. Stay tuned!