This year’s edition of LibrePlanet went on so well, we had people stopping by to ask questions before the conference was open for the day.

Purism’s booth was busy, and people were happy to see us. Nearly everyone we talked to had been following our progress, and everyone was excited to see things in-person. We showcased the fourth version of Librem laptops, and made regular demonstrations of both PureBoot on a Librem 13v4 and Librem Key. Above all, we drew a lot of excitement around the in-person viewing of the Librem 5 devkit. So much excitement, we really wanted to write about the commotion caused by the Librem 5 development – and specially about the devkit demonstration – not only among the audience but also within our own team members.

The Librem 5 phone may still be months away from delivery, but the Librem 5 devkit is under very rapid development. Showcasing our progress is something we’re very proud of, so at the first day of LibrePlanet we whet the appetite of audience members by showcasing sub ten-second boot times from powered-off state to unlock-screen… and we also showed off the initial application support of calling, settings, chat/sms, and browser.

But it gets better: on the second day we drew audible gasps of astonishment – from people in the audience and staff alike – when we demonstrated a voice call from a phone to the Librem 5 devkit and it rang on cue, alerting of the incoming voice call. To add to the excitement, the Purism staff then powered up a second Librem 5 devkit and opened the chat/sms program and sms (text) – and messaged to and from another staff member over the cellular connection. 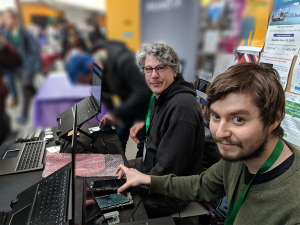 The Librem 5 as a product highlights the impressively diverse nature of our team’s expertise at Purism – from schematics through kernel development, through the creation of phosh; from the authorship of libhandy to initial adaptive design of core applications such as Web to PureOS Store and house curated applications, all the way to custom in-house design and the development of Calls, and Chat. A good summary to our presence at LibrePlanet, a few weeks ago, is that it ended up being an impressive demonstration of what people expect to get when the Librem 5 begins shipping in Q3 of 2019. And how amazed they will be at what they get.