Why I Support Purism, A Tech Company that Respects Digital Rights

I started working with personal computers over 40 years ago, back when an IBM desktop computer with 64KB of RAM and two 360KB floppy disks cost almost CAD$10,000. I bought the first Macintosh computer sold in Canada from the Hudson’s Bay Company in Montreal. I bought the first iPhone in Buffalo on the day the phone came out, brought it back to Canada, and spent hours entering code to unlock the phone so I could use it in Canada. I joined Facebook in its early days when someone on the platform had to invite you to join. I joined Twitter shortly after it went online. I was an enthusiastic supporter of these products and services with all the optimism that being young allows.

Now, all these years later, I have abandoned all these platforms. I regard them as deeply harmful to our society. As a father of 6 children, who now range in age from 11 to 29, I feel a responsibility to protect them and other people from the harms caused by big tech, which is why I became involved with Purism as both Chairperson of the Board of Directors and as a customer. 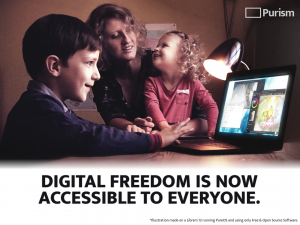 Big Tech is Harming You

Companies like Microsoft, Apple, Google, Facebook and Twitter continue to knowingly harm society by failing to protect users’ privacy and security, offering hardware and/or software deliberately designed to lock users into the use of their products and services (whether by forcing people to choose between Windows and Mac, or Android and iOS), engaging in monopolistic business practices, not paying their fair share of taxes, misrepresenting the privacy and security of their products and services, and greedily and unsustainably exploiting the planet’s resources.

Big tech’s hardware isn’t built to last because they want people to buy new models even though the differences between the old and new models are usually iterative at best). There’s a story about how Steve Jobs was angry because the first version of its colorful iMacs had a CD tray rather than a slot. Apparently, Johnny Ive responded by suggesting that Mr. Jobs was thinking of the next version of the iMac. Apparently, their approach to product development favors the company’s financial interest rather than that of their customers because they hold back on implementing available tech immediately so they can motivate customers to purchase new models.

I remember watching an episode of Unbreakable Kimmy Schmidt on Netflix in which a character is talking on his iPhone and just as he is telling the person he is speaking with that his iPhone turned one year old, the phone disintegrated in his hands. This was funny because we are all too familiar with companies that design their products to have short life spans so that replacements must be purchased repeatedly.

The world has a serious over-consumption problem, but bigger transnational technology corporations tend to be more interested in ignoring this issue to maximize their profits. If you want to know more about how these companies have operated thus far, check out the numerous news articles.

Here are 9 ways Purism is different

What You Can Do, Now

If you spend a bit of time reviewing the news links above to get a broader sense of the problems posed by Big Tech, and if you agree with us that there are viable solutions available to protect privacy, security, and democracy, then please purchase Purism’s privacy and security-focused products and services and join Purism in leading the way to make the Internet what it should have been all along: a global citizen square free of surveillance, exploitation and harm.