Beyond Right to Repair

Pick a random consumer device lying around your house and imagine someone coming across it after 70 years of neglect. Part of the device no longer works. Would they be able to fix it?

Today, devices are designed to be cheap, short-lived and disposable. The assumption is that if something you buy breaks, the only solution is to throw it away. Repairability and longevity is simply not a factor in most consumers’ minds.

In fact, this “use and throw” mentality contributes to massive e-waste. The total e-waste around the world this year is estimated to reach a record 57.4 million tonnes–that is, more than the weight of the Great Wall of China

Being able to repair things we own is critical to extending their longevity. This past week the Library of Congress approved changes to the Digital Millenium Copyright Act (DMCA) that grant people the right to get into their consumer devices for the purposes of diagnostics, repair, and maintenance. This is part of an overall initiative to expand the so-called “Right to Repair” nationally within the US (there are similar efforts in the EU).

The core idea behind Right to Repair is to prevent companies from using the DMCA or other means to block consumers from being able to take apart, reverse engineer, and repair things they buy. Removing the legal risk is a big step forward, but we must move beyond the Right to Repair before the devices you buy are actually repairable. In this post I will elaborate on the problem of longevity in modern devices and some solutions. It starts with parts and ends with software.

You Can Fix The Past

One day I was browsing through a selection of used books and found a book I had to buy. It was published in 1977, called the Fix-It-Yourself Manual, and the cover explained that the book showed “How to repair, clean, and maintain anything and everything in and around your home.” The cover wasn’t kidding. The first chapters cover how to repair books, ceramics, doors, jewelry, plumbing, typewriters, furniture, and upholstery. The middle chapters cover electricity and all the major small and large appliances you’d find in a house, and even cameras, radios, and TV sets. The final chapters cover basic automotive repairs, lawn mowers and other outdoor tools, and finally how to repair sporting goods and camping equipment. 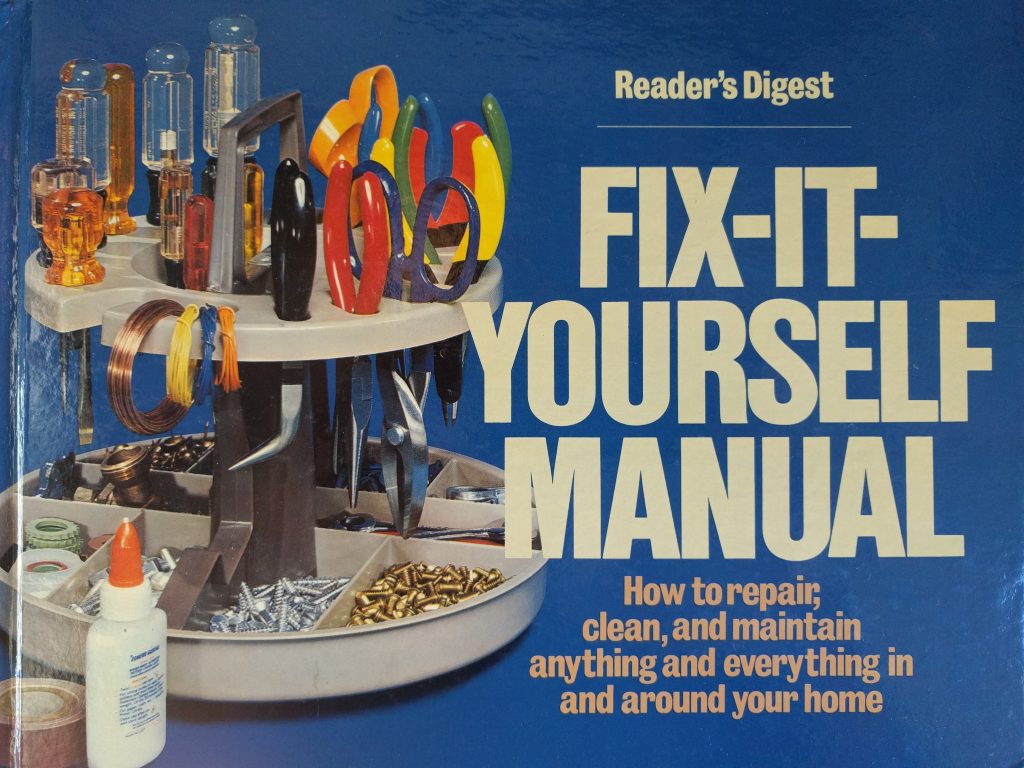 This book got me thinking: could you hope to write such a comprehensive book today? While you can argue the modern world is more complicated, the issue is not complexity. The issue is that in the past, devices were designed with repair and maintenance in mind. Consumers expected that if a device broke they would be able to fix it themselves, or if they didn’t have the skill and know-how they could take it to a local repair shop. The limiting factor wasn’t the device itself. People would reject vendors that made devices that didn’t last, and devices that weren’t repairable were dismissed as disposable junk.

I recently started a new hobby of collecting the precursor of modern computers: antique mechanical calculators. Something I’ve learned in the process is what it’s like to live in a world of repairability. Few of my machines were fully functional when I got them and some of them are over 100 years old. They have years of dirt, grime, and old grease gumming up their works and some have sat unused for decades. Yet because these machines were designed to be serviced and repaired, I’ve been able to take them apart, inspect them, troubleshoot their problems, and repair them with a little cleaning and some oil–even though I knew next to nothing about calculator repair.

For instance, my 70-year-old Monroe LN-160x had a stuck mechanism in one register that prevented operations like division. With a little troubleshooting, and some cleaning and oil I was able to fix that mechanism and now the machine is fully functional. Here’s that calculator performing 145 / 12:

Can You Fix The Future?

One of the biggest impediments to repairing modern devices is the lack of user-replaceable parts. In the name of design (but driven by other incentives), laptop manufacturers not only hide their screws (or require hard-to-find screwdriver bits), they also solder as many components as possible directly on the motherboard. While it may make a laptop a bit thinner, it also means that a consumer often can’t upgrade their RAM, their storage, or their WiFi cards or other peripherals after they buy it. It’s even worse than those all-in-one TV/VCR/DVD players from the 1990s, because when one component inevitably fails, you can’t just keep using the rest–you have to replace the whole computer.

Soldering on components works to the vendor’s advantage, as they can sell a cheaper base configuration along with progressively-more-expensive models, each with locked-in specifications the customer can’t upgrade. The consumer is left with a dilemma: even if the base model is good enough today, will it be in a few years? As a result they either buy the more expensive configuration today, or stick with the base model and later when they need more storage or RAM, have no recourse but to buy a whole new laptop.

The situation is even worse with phones, due to the smaller form factor, yet even that has gotten worse over time. Phones are rarely made with longevity in mind, and it’s uncommon these days that the battery, the most likely component to fail, is replaceable, or that you can expand the storage with a microSD card. Combine that with an industry that incentivizes replacing your phone every 2 to 3 years, and it’s no wonder that phone e-waste is such a problem.

We think you should be able to upgrade your computer after you buy it, and replace a component if it fails without having to replace the whole computer. That’s why the Librem 14 has user-replaceable RAM, storage, WiFi and even the battery. We extended this repairability to our Librem 5 phone with a user-replaceable battery, smart card, microSD card, modem and WiFi card so that, combined with life-time software updates, the Librem 5 demonstrates you can design a phone for longevity.

Even if you can open up the hardware to repair a device, its software is still welded shut. Many consumer devices ship with proprietary software so the customer has no ability to inspect or fix software problems themselves–they have to rely on the vendor for updates. Beyond that vendors often add cryptographic locks backed by the hardware itself, to prevent running any software the vendor doesn’t approve, so even if you did manage to fix the software, you would need their permission to run it.

Vendors do these things not for security, but because they want full control over the hardware and the software, and they benefit from your being dependent upon them for updates and fixes. A great way to encourage you to buy their latest and greatest product is to stop providing improvements for the previous one.

This problem isn’t limited to traditional computers. Most consumer devices today, especially ones with “smart” in the name, embed some sort of computer running some sort of mystery software. Everything from your refrigerator, to your speakers, door locks, and even your washing machine now have a computer running software that manages the entire device and communicates on your network. If the software fails you have no choice but to hope for an update from the vendor (if they still exist, and still provide updates), or else replace the whole appliance.

These new DMCA exemptions mean that people can reverse engineer software on their devices, jailbreak their phones, and otherwise circumvent software protections the vendor has put in without being sued. Yet being protected from a lawsuit isn’t enough if the goal is the ability to repair your devices. If you really want to repair software, you need to have access to the source code so you (or someone else with the know-how) can find and fix bugs.

We Support The Right and The Ability to Repair

We want you to be able to repair our devices now and in the years to come. This is one reason why we ship our computers with an operating system, PureOS, made up of 100% free software, and replace the firmware on our devices with free software wherever possible. It’s also why we are working incredibly hard to move all of our kernel changes for our Librem 5 phone into the mainline Linux kernel. You shouldn’t have to depend on us to repair your software, and if someone comes across a Librem 5 in 70 years, we want them to be able to maintain it. If you value the Right to Repair, vote with your dollar for devices that respect your rights, and support vendors that let you truly own and repair the things you buy.