This is another installment in my series on easy Librem 5 app development using command-line tools and the GUI-building tool yad. If you missed my previous articles on this topic check out how I created a screenshot and flashlight app using these same principles. As with the previous articles, this article starts with a problem I needed to solve–scaling the screen.

Some Background on the Librem 5 Screen

The Librem 5 phone has a 720×1440 screen, but that is a relatively high concentration of pixels when applied to a 5.7″ screen running traditional desktop applications and would not only leave you squinting at a lot of the text, it would make it difficult to press buttons and select items in menus. As we document in our design contraints page, we scale the desktop 2x to a resolution of 360×720 and once you take the top and bottom navigation bars into account you end up with a portrait resolution of 360×648 or a landscape resolution of 720×288.

While our native applications take these constraints into account, and we continue to adapt new applications to work well on a phone screen, there are still plenty of applications that run on the Librem 5, they just don’t yet fit. For instance, here’s Wireshark looking great on the Librem 5 in landscape mode when scaled to 1.25x:

I decided I wanted to build a simple application that would let me switch between a few scaling amounts to see how different programs behaved. For starters I needed a way to change the Wayland screen scaling from the command line and it turns out an application called wlr-randr behaved much like the old xrandr program I already knew, but for Wayland instead of X.

Unfortunately wlr-randr isn’t packaged for PureOS (yet) so I needed to build it from its github repo at https://github.com/emersion/wlr-randr. This meant installing the build dependencies I’d need and then compiling the application manually:

With wlr-randr installed, I could open a terminal and experiment with different scaling factors from the command line:

and then return to the default scaling factor of 2 when I was done:

Once I had wlr-randr installed and working, the next step was to wrap this in a GUI application. Like with previous applications I used yad and in particular took advantage of its form-building options to build a series of buttons that would execute different wlr-randr commands at different scale settings. I put the final bash script in /home/purism/bin/scale_screen:

I wanted to launch this application from the screen so I also created a launcher file in /home/purism/.local/share/applications/scale_screen.desktop:

Now I could just click on the icon and see my app: 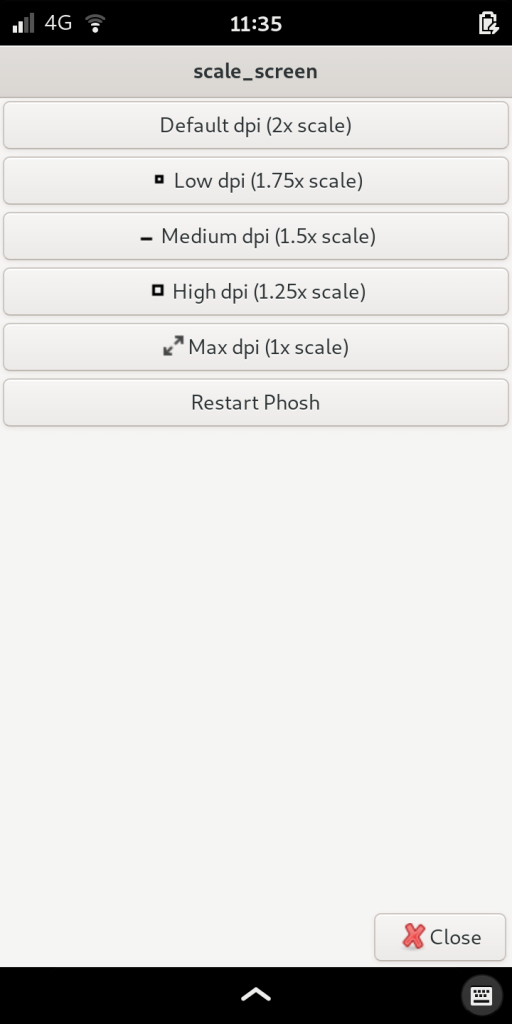 As before, I’m very pleased with just how easy it is to write simple but useful applications that solve real problems on the Librem 5 using standard tools. Now that I have this tool in place I’ll be able to try out all sorts of other GUI applications that haven’t upgraded to an adaptive UI yet.