I wanted to look back at what changed in phosh in 2022 and figured I could share it with you. I’ll be focusing on things very close to the mobile shell, for a broader overview, do watch Evangelos upcoming FOSDEM talk in February 2023.

I hope we can keep that cadence in 2023 as it allows us to get changes to users in a timely fashion (thus closing usability gaps as early as possible) as well as giving distributions a way to plan ahead. Ideally we’d not skip any release but sometimes real life just interferes.

Those releases contain code contributions from about 20 different people and translations from about 30 translators. These numbers are roughly the same as 2021 which is great. Thanks everyone!

In phosh’s git repository we had a bit over 730 non-merge commits (roughly 2 per day), which is about 10% less than in 2021. Looking closer this is easily compensated by commits to phoc (which needed quite some work for the gestures) and phosh-mobile-settings which didn’t exist in 2021.

Most notable new features are the swipe gestures for top and bottom bar.

And the possibility to use the quick settings on the lock screen as well as the style refresh driven by Sam Hewitt that e.g. touched the modal dialogs (but also sliders, dialpads, etc):

We also added the possibility to have custom widgets via loadable plugins on the lock screen so the user can decide which information should be available. We currently ship plugins to show

These are maintained within phosh’s source tree although out of tree plugins should be doable too.

There’s a settings application (the above mentioned phosh-mobile-settings) to enable these. It also allows those plugins to have individual preferences:

Speaking of configurability: Scale-to-fit settings (to work around applications that don’t fit the screen) and haptic/led feedback are now configurable without resorting to the command line: 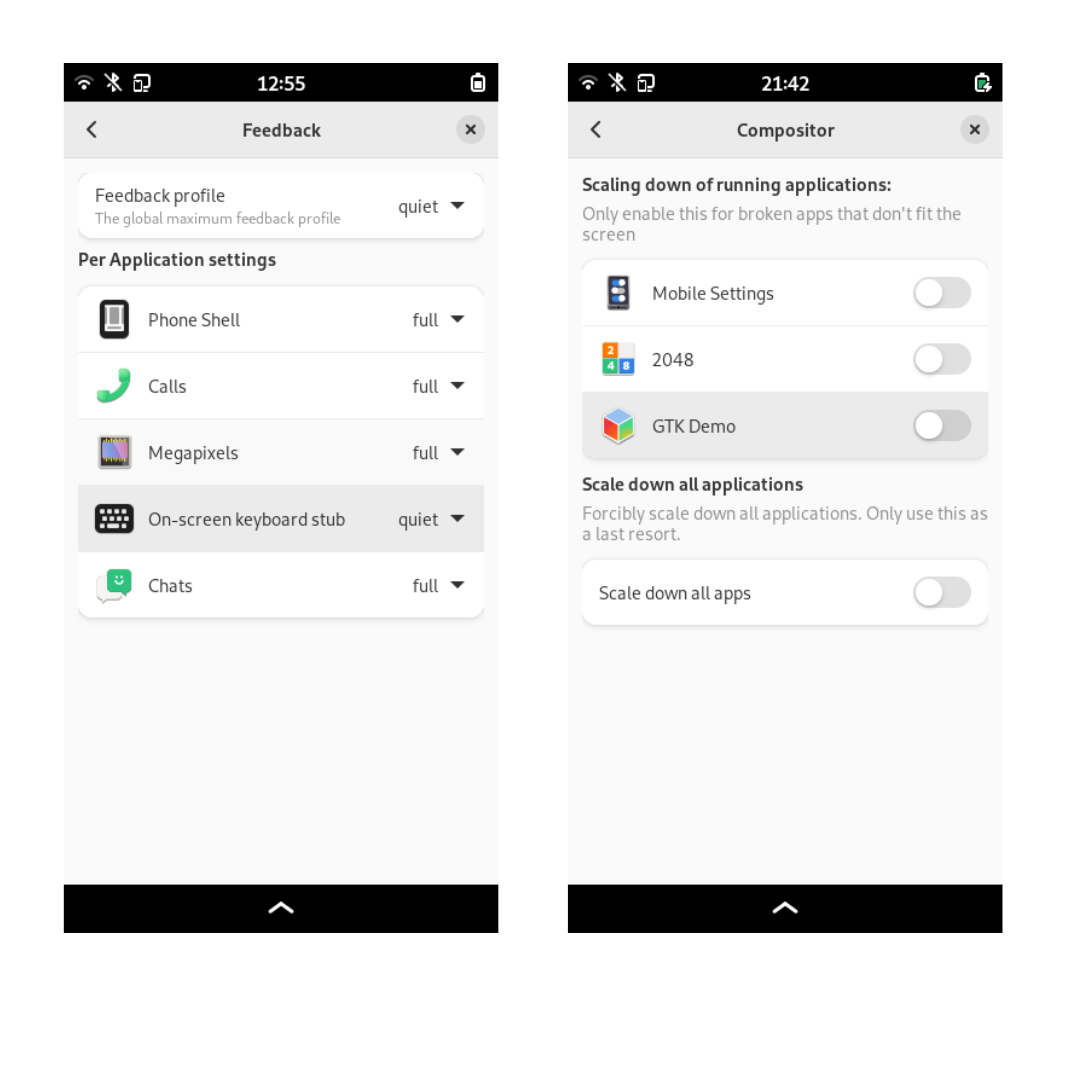 We can also have device specific settings which helps to temporarily accumulate special workaround without affecting other phones.

Other user visible features include the ability to shuffle the digits on the lockscreen’s keypad, a VPN quick settings, improved screenshot support and automatic high contrast theme switching when in bright sunlight (based on ambient sensor readings) as shown here.

As mentioned above Evangelos will talk at FOSDEM 2023 about the broader ecosystem improvements including GNOME, GTK, wlroots, phoc, feedbackd, ModemManager, mmsd, NetworkManager and many others without phosh wouldn’t be possible.

As I wanted a T-shirt for Debconf 2022 in Prizren so I created a logo heavily inspired by those cute tiger images you often see in Southeast Asia. Based on that I also made a first batch of stickers mostly distributed at FroSCon 2022:

That’s it for 2022. If you want to get involved into phosh testing, development or documentation then just drop by in the matrix room.

This article has also been published in Colors of Noise, here.